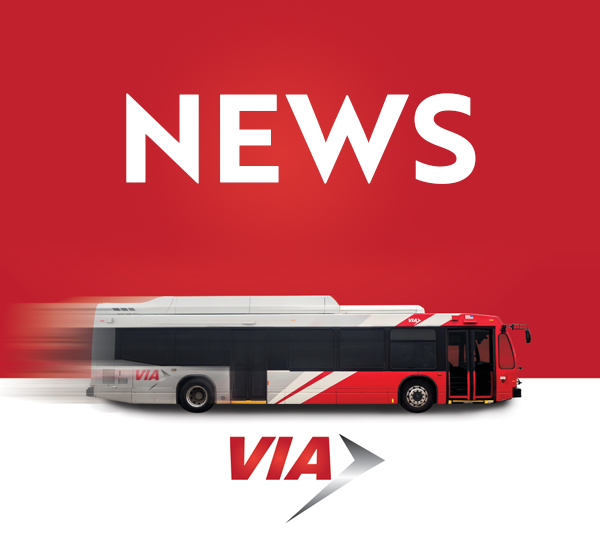 The VIA Metropolitan Transit/Advanced Transportation District Board of Trustees voted unanimously Thursday to formally order an election for Nov. 3, 2020, for a proposition that would redirect a 1/8-cent share of sales tax to support public transportation in San Antonio with no net tax increase.

Thursday’s vote followed similar action taken by the San Antonio City Council to place on the same ballot a proposition that would use the sales tax share for a COVID-related workforce development program. The City and VIA agreed on the plan that would use the same funding — first for the city program and then for VIA, with no net tax increase.

“I’m proud to be part of the team who will bring this decision to the voters in November,” Board Chair Hope Andrade said. “With their support, we can help deliver dramatic improvements not only to the transit and mobility systems that keep San Antonio moving but to the lives of the now over 2 million residents—and counting—who live and work here, and rely on us to move people, every day.”

The sales tax, which is expected to generate $38.5 million annually, would fund VIA’s Keep SA Moving plan, which builds on VIA’s commitment to invest in people, jobs, and the economy by focusing on key priorities, including:

• Rebalancing the System by strengthening core service, dedicating resources for fixed route service where there is the most need, and expanding on-demand, weekend, and late-night response services.
• Expanding Mobility Options through partnerships for innovative services such as the successful Mobility on Demand project (VIA Link), car-share, bike-share, ride-share and accessible services that add more options for workforce, elderly, and persons with disabilities.
• Expanded Technology and Capital Improvements by investing in and leveraging innovative solutions, updating the VIA integrated app, and making Advanced Rapid Transit (ART) plans shovel ready.

The Keep SA Moving plan preserves the lifeline transit provides today and prepares us for a more mobile future. It addresses the need for sustainable, reliable, safe and affordable transit in San Antonio while also preparing the agency for a future that includes continued rapid growth in the region.

VIA President/CEO Jeffrey C. Arndt called Thursday’s action the highlight of his career. “Public transit is a lifeline for those who rely on VIA and the bridge our city needs to drive economic recovery and growth,” Arndt said. “Today, we took the first step across that bridge, toward more equitable access to opportunity, and a more prosperous future for San Antonians.”

VIA Metropolitan Transit was founded in 1977, when San Antonio voters were the first in Texas to create a metropolitan transit authority under a state law enacted in 1973. Voters at the time were asked to approve just half of the 1% of local sales tax designed for transit use.

Additionally, the Advanced Transportation District receives a ¼-cent tax within San Antonio, for which it keeps half (1/8) and provides the other half to Bexar County and the City for highway and mobility projects.

After San Antonio, every other major Texas city asked voters to approve the full 1-cent of available sales tax — the maximum rate authorized by the Legislature. For over 40 years, San Antonio – among the largest and poorest cities in Texas and the nation – has asked its residents to make do with a chronically underfunded system. If approved by voters, the additional 1/8-cent share of sales tax would fund advanced transportation projects to enhance and improve service in the region.